Attitudes Need To Change Or We Are Doomed!

Environmentalists are aggressively fighting natural gas drilling in NY, while NJ installs solar panels that are  mysteriously disappearing and rallied against as an “eyesore”.

Two articles within days of each other….. one about natural gas drilling, the other solar energy.  Clear case of NIMBY-ism. It is not a case of right and wrong or what is good for the country, the environment, the economy or freedom from the stranglehold of foreign oil….. it is clear that many people will oppose anything if it is too close to home. The more they oppose, whether it is gas drilling, solar, wind power, hydro, coal or nuclear…. the more their voices lose the power needed to be effective.

Hundreds of fracking opponents from around New York state will be meeting with state legislators Monday, according to Adrian Kuzminski of Fly Creek, moderator of Sustainable Otsego.

“From what I’ve been told, the people going to Albany plan to meet with 80 percent of the state’s legislators and tell them of our concerns, tell them about the science,” he said. “Hundreds of people are going.”

The rally is planned as the state Department of Environmental Conservation prepares to unveil new proposed rules for horizontal drilling in the Marcellus and Utica shales that underlie much of the area. Experts said the shales are rich in gas, and the state guarantees royalties for land owners.

Sustainable Otsego has amassed evidence of the dangers of fracking _ hydraulic fracturing _ in a white paper, available to elected officials, Kuzminski said.

“The evidence is pretty compelling, and we keep adding to it,” he said.

Hydraulic fracturing, or “fracking,” is the injection of water, sand and chemicals under high pressure to stimulate natural gas production.

Industry and other proponents say the process is safe and promises large economic benefits; opponents say it threatens to contaminate water, air and land.

Kuzminski noted that a bill to prohibit fracking and one to place a moratorium on fracking for five years have been proposed in the state legislature. He also noted that several institutions in Otsego County, including the board of Bassett Medical Center, have warned about the dangers of fracking.

“I’m going Monday to support a ban until fracking can be proven safe,” he said.

He said he hoped to speak to Sen. James Seward, R-Milford, and Assemblyman Pete Lopez, R-Schoharie.

Teresa Winchester of Butternuts, former executive director of the Otsego County Conservation Association, said people in the Oneonta area may take a bus, scheduled to leave 41 Orchard Street at 8:30 a.m.

A round-trip ticket is $18, although those who can’t afford the price will be given rides, she said.

“On Monday, April 11th, New Yorkers from Brooklyn to Buffalo and everywhere in between will travel to the state capital to send a message to Governor Cuomo and state lawmakers: Protect New York from dirty drilling!” the organization states on its website. 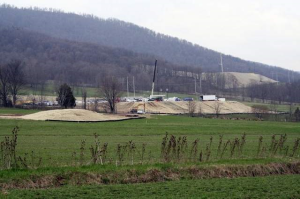 Readers’ Comments  “Oil prices are going through the roof, planet is being destroyed by power plants and these people who were given access to sustainable energy are complaining about the view. Attitudes need to change or we’re doomed.”

N.J. — Nancy and Eric Olsen could not pinpoint exactly when it happened or how. All they knew was one moment they had a pastoral view of a soccer field and the woods from their 1920s colonial-style house; the next all they could see were three solar panels.

“I hate them,” Mr. Olsen, 40, said of the row of panels attached to electrical poles across the street. “It’s just an eyesore.”

Around the corner lives Tom Trobiano, 61, a liquor salesman, now adapting to the lone solar panel hanging over his driveway. “When it’s up close,” he said, “the panel takes on a life of its own.”

Like a massive Christo project but without the advance publicity, installations have been popping up across New Jersey for about a year now, courtesy of New Jersey’s largest utility, the Public Service Electric and Gas Company. Unlike other solar projects tucked away on roofs or in industrial areas, the utility is mounting 200,000 individual panels in neighborhoods throughout its service area, covering nearly three-quarters of the state.

The solar installations, the first and most extensive of their kind in the country, are part of a $515 million investment in solar projects by PSE&G under a state mandate that by 2021 power providers get 23 percent of their electricity from renewable sources. If they were laid out in a solar farm, the 5-by-2.5-foot panels would blanket 170 acres.

New Jersey is second only to California in solar power capacity thanks to financial incentives and a public policy commitment to renewable energy industries seeded during Gov. Jon S. Corzine’s administration. But what might have been a point of pride in a state better known as the nation’s leader in toxic Superfund sites has instead caused suburban aesthetic unrest.

Some residents consider the overhanging panels “ugly” and “hideous” and worry aloud about the effect on property values.

Though nearly halfway finished, the company’s crews have encountered some fresh resistance in Bergen County, where cities, villages and boroughs are in varying stages of mortification. Local officials have forced a temporary halt in many towns as they seek assurances that they will not be liable in case of injury, but also to buy time for suggesting alternative sites — like dumps — to spare their tree-lined streets.

And here in Oradell, at least one panel has gone missing.

When and where the panels will show up next can be a mystery, prompting complaints over the lack of prior notice.

“I came back from running errands and there they were,” Mrs. Olsen, 37, said. “It’s not right. They should have warned us.”

In neighboring Ridgewood, Deputy Mayor Thomas M. Riche said constituents had called, sent e-mails and stopped him on the street demanding that he halt the encroaching blight. Ridgewood, an affluent village of about 24,000, got PSE&G to cease installations after only a few had been put up, over concerns that they would interfere with the emergency communications boxes on the poles.

The talks are continuing, Mr. Riche said, adding that he is trying to steer the Ridgewood panels to a town park-and-ride lot and its public schools.

“A cluster of panels in one area is better than individual panels all over the town,” he said. “We’re not against solar energy, but there are more efficient ways than having panels on the utility poles.”

PSE&G officials said their search for maximum sun exposure could not dodge and weave residential areas in a place as crowded as New Jersey. It turns out that only a quarter of the company’s 800,000 poles are suitable for the panels, which are mounted 15 feet high and need good southern exposure.

Solar industry experts approve of the decentralized pole-by-pole approach and said it could be just as efficient and cost effective as larger installations.

“Solar is extremely flexible,” said Monique Hanis, a spokeswoman for the Solar Energy Industries Association, a trade group based in Washington. “The utility owns the property already, and the panels can feed right into the transmission line.”

Ralph A. LaRossa, PSE&G’s president and chief executive, said that the company was also placing panels, which direct the energy they generate back into the power grid, at its industrial yards and on facility rooftops, and that it was leasing flat roofs of large buildings, including several schools in Newark. “We’re looking for ways to deploy the technology in the cheapest and most accessible way,” he said.

Yes, Mr. LaRossa said, his company could have communicated better, but he added that Bergen County had become “a pocket” of opposition in what had generally been a welcoming reception.

And not every burg in Bergen County is rebelling. Over in Fair Lawn, Mayor Lisa Swain said that her city had not interfered with the program and that she was trying to make the community sustainable in other ways, like using motion sensor lighting in city buildings.

Sean Smith, a 43-year-old airline sales supervisor in Fair Lawn, said he was fine with the seven panels on his street, especially “if it’s helping the greenhouse effect.”

“We have the kids to think about,” he said.

But his neighbor Tony Christofi, a 47-year-old contractor, wondered aloud whether Fair Lawn, by not fighting, was getting more than its fair share.

“I’m fine with green energy,” he said, “but are the savings going to be passed on to consumers?”

PSE&G officials said solar energy was still more expensive to produce than more traditional power sources and acknowledged that bills were going up 29 cents a month. One panel will  produce enough kilowatt hours in one year to light four 60-watt bulbs around the clock for around six weeks, the company said.

When complete, the panels on the poles are expected to provide half of the 80 megawatts of electricity generated by the utility’s overall $515 million solar investment — enough to power 6,500 homes.

Although he supports renewable energy, Gov. Chris Christie, through a spokesman, characterized the mandates that spawned the panel project as “extremely aggressive.” He has already asked that they be re-evaluated.

Over in Oradell, population 8,000, some residents say the new units aren’t worth the effort, producing too little power for the aggravation.

The case of the missing panel has been referred to local law enforcement.

“PSE&G takes a very dim view of people tampering with the equipment,” said Francis Sullivan, a company spokesman, “but that’s secondary to the fact that it’s just a dangerous idea.” All the units are connected to high-voltage wires.

Richard Joel Sr., a lawyer in town, said a panel close to his house had been removed, but demurred when asked if he knew details.

“I’m not saying what happened,” he said. 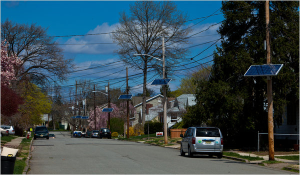 Residents elsewhere were upset they had not been notified before installation.