Indomitable spirits are reviving the resort culture of Sharon Springs, in Schoharie County. Long known for its magnesium water, iron-rich water, sulfur water and bluestone water for healing the eyes, Sharon Springs is taking on a 21st century approach aimed at resurrecting an a sense of well-being and relaxation.

In and around the village, vestiges of the old landscape — where magnificent large hotels are now defunct — can still be seen. But, a closer look reveals an amazing transformation. 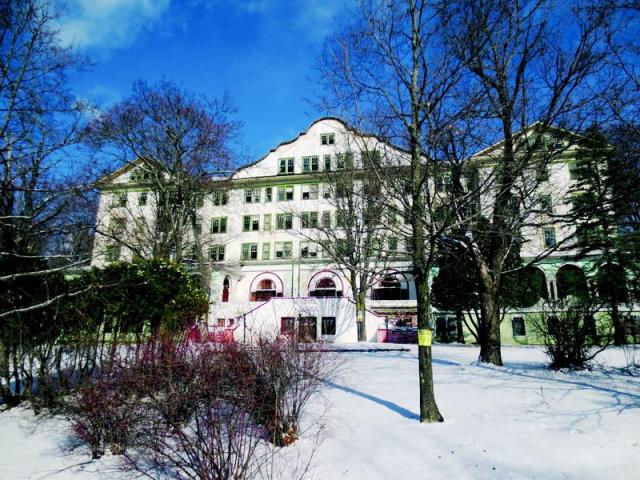 By the second half of the 19th century, Sharon Springs was home to more than 60 hotels and rooming houses. It has been said that the spa heyday began in year 1825, when David Eldredge established a boarding house near the mineral springs, sparking an interest in the area.

Magnificent large Hotels were erected and the elite swarmed to the spas for pampering. It was a go-to destination spot and trains were packed with tourists and vacationers on a daily basis. Thanks to its sulfur, magnesium, and chalybeate mineral springs, Sharon Springs grew into a bustling health spa during the 19th century. At the peak of its popularity, Sharon Springs hosted 10,000 visitors each summer, including members of the Vanderbilt family and Oscar Wilde.  Direct ferry-to-stagecoach lines connected New York City to Sharon Springs, followed by rail lines connecting the Village to New York City and Boston via Albany. Visitors would flock to the village each summer to relax in a bathhouse, receive a mud bath, or take a hike through the woods.

Sharon Springs was also associated with several beer barons in the late 19th and early 20th century. Most American hops were grown in a belt stretching from Madison to Schoharie Counties in upstate New York. The Sharon Springs area attracted brewers who summered in the area, two of which, Henry Clausen and Max Shaefer, built homes in the Village. The New York hops trade disappeared after the first world war, due to the combined effects of competition from Oregon, a hops blight, and the coming of prohibition. 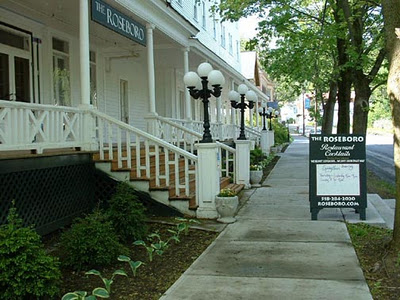 A series of events culminated in plummeting business in Sharon Springs in the 20th century. With the advent of the automobile, visitors drove elsewhere to new resorts. Scientific discoveries revealed improved treatments. Prohibition closed the taverns and breweries, hop farms switched crops and the trains stopped coming. Society was taking on the habit of eating processed food and going to the local gym to work off the calories — too busy to drive to Sharon Springs.

But again, a series of events culminated and has caused a return of businesses to Sharon Springs. The results of scarfing down fast food and sitting too much in front of the TV went against the grain of well-being. The minds of society started waking up to the fact we need to get out in the great outdoors. We need to know where our food comes from. We need to get to know one another and appreciate our talents. The growing desire to get back to eating and living healthy, eating true organic produce and grass-fed meat. The desire to “live simply so others may simply live” is alive and well in upstate New York.

The Black Cat Café menu boasts Lebanese potato salad, homemade corned beef, applewood-smoked bacon and curried chicken. Vegetarian and vegan foodstuff, along with tempting desserts, bring in those who wish to satisfy their appetites with wholesome ingredients and conversation.

Sharon Springs exudes a casual welcoming atmosphere. The newest store, Sustainables, where you can purchase lamb and honey is owned and operated by Caroline Foote. Sustainables sells a stash of items aimed at healthy living. Local farmers bring their organic and grass-fed meat in to sell. Sustainables also offers granola, honey, nuts, dairy and even pottery. The store targets a traditional-food market where the customer can learn the origin of the food they are purchasing.

Next door is the Beekman Boys 1802 building. After losing their jobs in New York City during the 2008 economic crunch, Brent Ridge and Josh Kilmer-Purcell riveted their attention on prospering in Sharon Springs, buying and fixing up an old farmhouse. Eating what they grow and making food from scratch has become their forte. Staunch, clean-cut and a whirl of activity, the self-styled “Beekman Boys” rapidly became famous for goat-cheese items, blogging and cookery. The Fabulous Beekman Boys is a reality television show that highlights Josh Kilmer-Purcell and his husband Brent Ridge as they learn how to become farmers and launch their lifestyle brand.

Beekman Farm after the rain

The cheese that started it all for the Beekman Boys is the Blaak cheese, an Italian style semi-hard cheese made from a 60/40 mix of goat and cow milk. The mix provides a mild yet distinct flavor. This rare cheese is aged for three months in caves and coated with ash at each turning to promote ripening of the wheel. 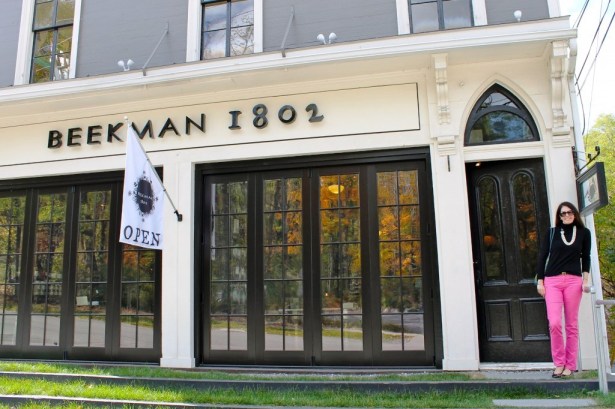 One of the top three sellers, Blaak Drizzle, is a reduction of balsamic vinegar, figs and the native elderberries that grow wild around Beekman 1802 Farm and all over New York State. 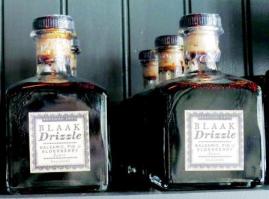 Unafraid to tackle wellness in the 21st century, residents have made the conscious decision to impact the health of the people and the health of Sharon Springs in the post-modern era.

Higher levels of spa treatments have developed over the last century, bringing a new fresh look to Sharon Springs. Spring House Spa, owned and operated by Cheryl Rosen, licensed massage therapist, reinstates traditional therapy with products of the highest quality, containing as many natural and organic ingredients as possible to reduce the toxic load on the body.

Services also include facials, sports massage, mother-to-be massage, deep tissue and aromatherapy massage. Body wraps, reflexology and hydrating foot treatments and so on add to the mission of supporting clients to maintain a low stress and healthy lifestyle.

Inside the Spring House Spa is a gallery with photos from the past displayed professionally on the wall, showing the village’s picturesque history. History books, produced by The Sharon Springs Historical Society, were also for sell.

RESCUING THE PAST & INVESTING IN THE FUTURE:

Near the Spring House Spa is the American Hotel, established in 1847, but abandoned 30 years ago. At the end of the 20th century, partners, Garth Roberts and Doug Plummer, purchased and saved the property from almost certain demolition. After four years of extensive renovation, The American Hotel and Restaurant reopened summer of 2001. 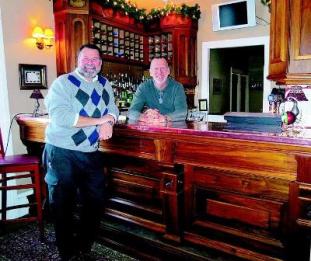 Going through an album of before-and-after pictures, Plummer said, “The roof was collapsed, the foundation was in terrible shape, and toilets had fallen through floors.” Undaunted, the men cleaned up and hired contractors to renovate. “Black walnut trees had to be cut down for the driveway and the wood was used to build the new bar,” added Plummer, who also mayor of Sharon Springs.

Plummer said, “Investors from South Korea are set to restore the Imperial Baths on Main Street and the Columbia Hotel. Also, California investors have signed a contract to purchase the Roseboro Hotel and begin renovation this spring. Then, along with other investors, Garth Roberts and I will be transforming the Klinkhart Hall into the Sharon Springs Center for the Arts once a 501 (c) status is granted.”

The Klinkart Hall was built in 1889 and contains an auditorium upstairs, with a movie area downstairs that seats 350. 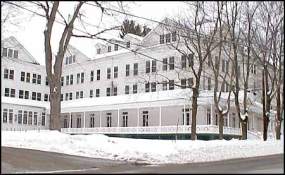 There is more to see in historic Sharon Springs. Temples, museums, old mansions and an old schoolhouse. Interested in more active pursuits? There is hiking, bicycling, dog training courses and planned runs. You can also partake in the village’s self-guided historic and architectural walking tours. And of course there are the spas and bathhouses, the surrounding nature, streams and waterfalls. A beautiful and bucolic setting surrounding a bustling upstate community that has come home again. The 1800s may be long gone, but the Sharon Springs of today has plenty to offer for 21st-century visitors.

The Village of Sharon Springs sits in the northwest part of the Town of Sharon, New York, approximately 50 miles (80 km) west of Albany, the state capital. Surrounded by rolling hills and nestled in a winding valley, the tidy village is near some of New York State’s most popular attractions. Howe Caverns is 15 miles (24 km) to the south while The Mohawk River and Erie Canal are only 10 miles (16 km) to the north. The Adirondack Park is further north, about an hour away. Cooperstown, New York, home to the National Baseball Hall of Fame and Museum, The Farmer’s Museum, Glimmerglass Opera House and The Fenimore Art Museum, is 30 miles (48 km) to the west and the Catskill Park is 50 miles (80 km) to the south.
For all your real estate needs, buying, selling, investing or in the market for that “back to the earth” organic farm… call the area’s Real Estate & Land Expert!  Kellie Place at Century 21!